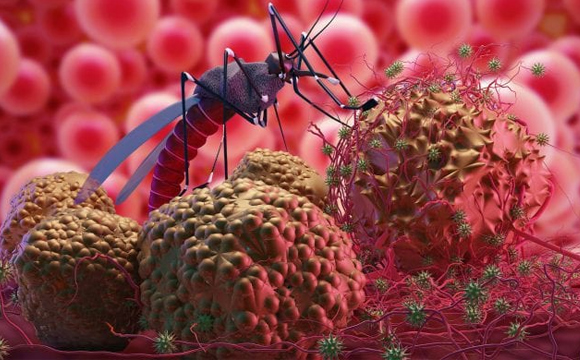 The natural history of malaria involves cyclical infection of humans and female anopheles mosquitoes . in humans , the parasites grow and multiply first in the liver cells and then in the red cells of the blood. In the blood, successive broods of parasite grow inside the red cells and destroy them, releasing daughter parasites (“merozoites”) that continue the cycle by invading other red cells.

The blood stage parasite are those that cause the symptoms of malaria. When certain forms of blood stage parasite (gametocytes, which occur in male and female forms) are ingested during blood feeding by a female anopheles mosquito, they mate in the gut of the mosquitoes and begin a cycle of growth and multiplication in the mosquito. After 10-18 days , a form of the parasite called a sporozoite migrates to the mosquito salivary glands. When the anopheles mosquito takes a blood meal on another human , anticoagulant saliva is injected together with the sporozoites ,which migrate to the liver, thereby beginning a new cycle.

Thus the infected mosquito carries the disease from one human to another (acting as “vector”), while infected humans transmit the parasite to the mosquito, contrast to the human host, the mosquito vector does not suffer from the presence of the parasites.

Where does malaria transmission occur ?

For malaria transmission to occur , conditions must be such that all three components of the malaria life cycle are present :

Anopheles mosquitoes , which able to feed on humans humans, and in which the parasite can complete the “invertebrates’ host” half of their life cycle

Humans .who can be bitten by anopheles mosquitoes, and in whom the parasite can complete the “vertebrate host” half of their life cycleMalaria parasite.

Anopheles lay their eggs in variety of fresh or brackish bodies of water, with different species having different preferances. Eggs hatch within a few days ,with resulting larve spending 9-12 days to develop into adult in tropical areas. If larval habitats dry up before the process is completed , the larvae die; if rains are excessive , they may be flushed and destroyed. Life is precarious for mosquito larvae , with most perishing before becoming adults.

Life is usually short for adult mosquitoes as well, with temperature and humidity affecting longevity. Only older females can transmit malaria, as they must live long enough for sprozoites to develop and move to the salivary glands. This process takes a minimum of nine days when temperatures are warm (300 C or 860F) and will take much longer at cooler temperatures. If temperature are too cool ( 150C or 590 F) for plasmodium vivax , 200C OR 680F for P.falciparum), development can’t be completed and malaria can’t be transmitted. Thus , malaria transmission is much more intense in warm an humid areas, with transmission possible in temperature areas only during summer months.

In warm climates people are more likely to sleep unprotected outdoors, thereby increasing exposure to night-biting anopheles mosquitoes. During harvest seasons, agricultural workers might sleep in the fields or nearby locals. Without protections against mosquitoes bites.

The types (species) of anopheles present in an area at a given time will influence the intensity of malaria transmission. Not all anopheles are equally efficient vectors for transmitting malaria from one person to another. Those species that are most prone to bite humans are the most dangerous, as bites inflicted on animals that can’t be infected with human malaria break the chain of transmission. If the mosquito regularly bites humans, the chain of transmission is broken and more people will become infected. Some species are biologically unable to sustain development of human malaria parasites, while others are readily infected and produce large numbers of sporozoites ( the parasite stage that is infective to humans).

Many of the most dangerous species bite human indoors. For these species insecticide treated mosquito nets and indoor residual spray ( whereby the inner wall of dwelling are coated with a long-lasting insecticide) are effective interventions. Both of these interventions require attention to insecticide resistance, which will evolve if the same insecticide is used continuously in the same area.